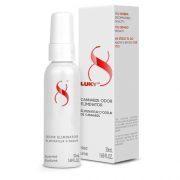 PRELAM wants to help adults to consume with dignity, without any intrusive odours

Moncton (N.B.), October 11, 2018 – PRELAM, a business from New Brunswick specialising in odour elimination, wants to help adults to consume their cannabis with dignity and without any intrusive odours. Located in Moncton, PRELAM will launch a new, innovative product, the LUKY8: a cannabis odour eliminator. The LUKY8 spray, an environmentally friendly product, will be on sale from 17 October 2018, the official date for cannabis legalisation in Canada. It will be available for purchase at prelam.com .

Unlike other odour elimination sprays that are usually found on the market, LUKY8 doesn’t just mask the odour, it eliminates it. It envelops and then destroys the cannabis molecule. All that remains in the atmosphere is a pleasant, slightly fruity scent.

“We are reaching out to adults who want to make an informed and considered decision to consume cannabis responsibly. We offer them a way to ensure a positive experience without being inhibited by the inconvenience of annoying residual odours”, explains Luc Jalbert, co-founder of PRELAM. He believes that the business, which has already proved itself with Just’a Drop – a toilet odour elimination product on sale worldwide – is in an ideal position to launch itself into an expanding market of products resulting from the legalisation of cannabis.

“The elimination and control of unpleasant odours is our strength and our specialty. We are certainly not lacking in boldness and imagination in this area. We are creating a product here that can be distributed all over the country,” declares Mr. Jalbert, who indicates that LUKY8 will be the first of its kind, as there are no other products like it on the market.

How does LUKY8 work?

All you have to do is spray the air around you, your clothes, or the furniture after consuming. LUKY8 acts quickly and poses no danger to pets. It can be bought in the 220ml format, or the pocket-sized 4ml format. The research, design and manufacturing of LUKY8 take place in Moncton, New Brunswick.

Soon to be on sale everywhere

PRELAM is undertaking discussions to ensure that LUKY8 is on sale with official cannabis retailers all over Canada as well as in various tobacco shops that sell accessories for the use of cannabis, and in large retail chains. The business also plans to offer the sale of individually labelled products to certain distributors.

PRELAM was founded in 1999 by Luc Jalbert and Don Goguen and specialises in air fresheners. It is recognized for its innovative products for the control and elimination of all kinds of unpleasant odours. More information can be found by consulting their website (www.prelam.com).